Created with a vision to produce quality handcrafted beers brewed in Ipswich, served in Ipswich, we first opened the doors to the Briarbank Bar and Brewery at precisely 7 pm on Friday 3rd May 2013. Our first floor Tap Room was fully stocked, serving our first ever beer, Tipple Tattle, which was brewed three weeks prior to opening, along with a range of other drinks.

The Briarbank Brewery has grown throughout the years; initially, we produced solely cask beer, brewed once a week. Now, our head brewer, Rob, produces a mixed range of traditional cask beer and new keg beer styles, brewing up to four times each week. And it’s not just the brewery that has grown; our upstairs Tap Room has too. Originally open to members only, we soon threw open our doors and welcomed everyone, and we’re pleased to say, our bar has been a popular attraction ever since.

In 2020 we started to bottle our beers and set up an online shop, allowing us to bring our handcrafted beers directly to our customers’ homes. Initially set up for local delivery, we’re pleased to say we now offer nationwide delivery, and we couldn’t be happier to be able to offer our Suffolk based beers across the UK.

While our beers are now available nationwide, we still maintain the same small, independent run brewery: our head brewer Rob, brews and bottles and labels all our beers in the microbrewery. And, if you live within the ten-mile free delivery radius, he’ll even deliver them directly to your door too. 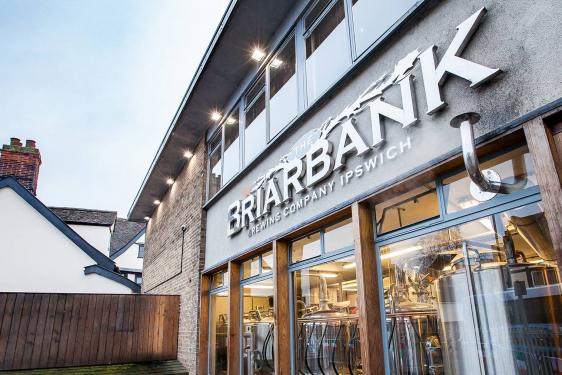 Over the past eight years, we have brewed both our core range and seasonal beers too. Our most popular, Black Horse Stout, was the second beer we brewed in the microbrewery. It has become a much-loved beer with our customers, and we’ve brewed over 60,000 pints. On our 100th batch, we wanted to do something special, so we doubled the strength and bumped up the recipe to create our Imperial Black Horse Stout and launched it at our 2019 August beer festival. We also love brewing our seasonal range, Insanity Claus is a firm favourite of ours and our customers.

The brewery itself is homed in what was previously a branch of Lloyds Bank. We purchased the building in 2004, which was used initially as storage until planning permission was granted in 2013 and soon set about getting to work on creating our vision. Working with local builders JW O’Dowd Ltd, Ian Cox Electrical, and Welsh Cellar Cooling, the building project started in 2014 and completed in May 2016. We haven’t altered our building’s footprint at all, and we’ve retained several features original to the bank. If you visit our first floor Tap Room, you’ll see we use the alarm bell to call last orders at the bar, and there are many photos of the building throughout that link it back to its past.

However, our site’s history goes back further, and we believe, returns us into a history of brewing. That’s because we’re probably set in the same spot as the St Clements Ale Stores, previously the Sailors Rest and Norwich Arms pubs. The stores, which the Cobbold Brewery owned, were closed in 1921.

So, while we might not yet have reached double figures, there’s certainly lots of history in and around our brewery.

If you’d like to find out more about the beers in which we brew, why not head across to our shop.

Visit our shop
Scroll to top

This site uses cookies. By continuing to browse the site, you are agreeing to our use of cookies.

We may request cookies to be set on your device. We use cookies to let us know when you visit our websites, how you interact with us, to enrich your user experience, and to customize your relationship with our website.

Click on the different category headings to find out more. You can also change some of your preferences. Note that blocking some types of cookies may impact your experience on our websites and the services we are able to offer.

These cookies are strictly necessary to provide you with services available through our website and to use some of its features.

Because these cookies are strictly necessary to deliver the website, you cannot refuse them without impacting how our site functions. You can block or delete them by changing your browser settings and force blocking all cookies on this website.

These cookies collect information that is used either in aggregate form to help us understand how our website is being used or how effective our marketing campaigns are, or to help us customize our website and application for you in order to enhance your experience.

If you do not want that we track your visist to our site you can disable tracking in your browser here:

We also use different external services like Google Webfonts, Google Maps and external Video providers. Since these providers may collect personal data like your IP address we allow you to block them here. Please be aware that this might heavily reduce the functionality and appearance of our site. Changes will take effect once you reload the page.