Briarbank Brewery – here for your beer

The craft of beer-making is hard at work at the Briarbank microbrewery. Located in a light and open setting that was once occupied by Lloyds Bank, here you’ll witness our head brewer blending traditional methods with bold new flavours and techniques.

With a two-barrel (BBL) system that’s powered by electricity rather than by gas, we have the capacity to brew over 350 litres – that’s eight casks – at any one time.

Brewing two to three times every week, and with four fermenters on our line, we can produce four different beers at any one time – certainly a unique brewery operation in Ipswich.

You will find our Briarbank beer on tap in our own Briarbank Bar and our sister establishments – The Gardeners Arms, Venue 77 and Isaacs on the Quay. Plus, we’ve recently launched our bottle and mini-keg range, meaning you can now enjoy a Briarbank beer in the comfort of your own home. Visit our online shop for details on what’s available. 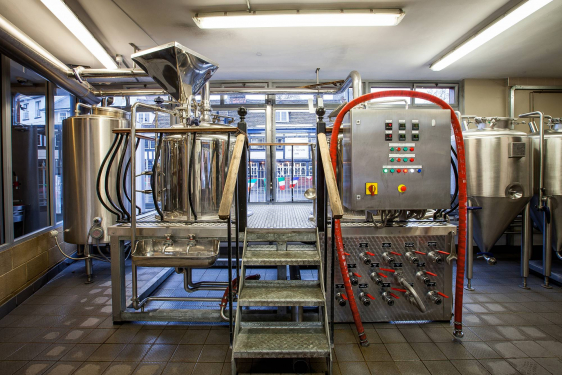 Rob has been brewing for over 10 years. He started home brewing while he was at university, at the age of 18. A lover of dark beers, Rob’s first-ever homebrew was a Porter, but that hasn’t stopped him from crafting a great range of paler beers too.

After being hooked on brewing from that very first creation and always open to experimenting with different flavours and techniques, Rob started to create his own beer recipes and combinations. He even made his own equipment for the job!

Since landing his dream job at Briarbank, Rob loves the freedom he has to try new flavours and create his beers, and he enjoys nothing better than seeing them being enjoyed by the customers in our bar. Over the past 12 months, Rob has been hard at work in the brewery, brewing, bottling and labelling our core range to bring the Briarbank’s creations to our customer’s homes. Plus, if you live within the ten-mile free delivery radius, he’ll even deliver them straight to your door.

This site uses cookies. By continuing to browse the site, you are agreeing to our use of cookies.

We may request cookies to be set on your device. We use cookies to let us know when you visit our websites, how you interact with us, to enrich your user experience, and to customize your relationship with our website.

Click on the different category headings to find out more. You can also change some of your preferences. Note that blocking some types of cookies may impact your experience on our websites and the services we are able to offer.

These cookies are strictly necessary to provide you with services available through our website and to use some of its features.

Because these cookies are strictly necessary to deliver the website, you cannot refuse them without impacting how our site functions. You can block or delete them by changing your browser settings and force blocking all cookies on this website.

These cookies collect information that is used either in aggregate form to help us understand how our website is being used or how effective our marketing campaigns are, or to help us customize our website and application for you in order to enhance your experience.

If you do not want that we track your visist to our site you can disable tracking in your browser here:

We also use different external services like Google Webfonts, Google Maps and external Video providers. Since these providers may collect personal data like your IP address we allow you to block them here. Please be aware that this might heavily reduce the functionality and appearance of our site. Changes will take effect once you reload the page.